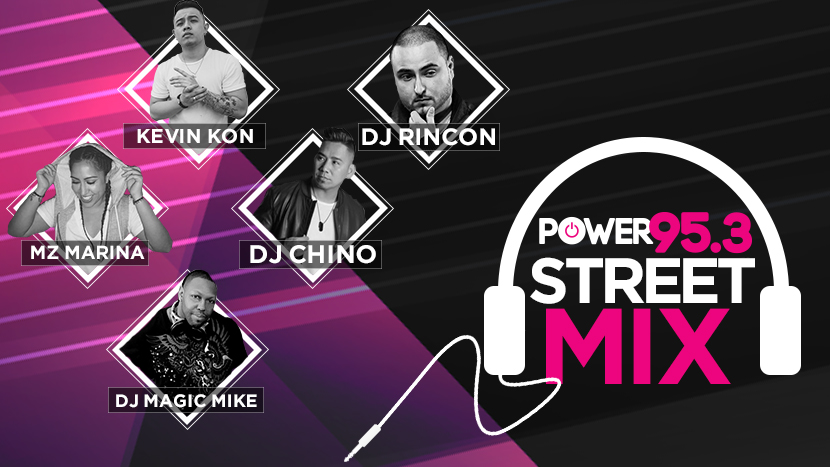 They're hot, they're on your radio and when you’re hanging out in the city, these are the DJs that get the party lit! Check out the POWER 95.3 DJs each and every time they go in the mix daily on the 5’o Clock Traffic Jam with Danie B and Kevin Kon, on the Throwback Thursday Mix at noon with DJ Nailz and DJ Chino, and every Friday and Saturday Night 10pm-3am on the Power 95.3 Street Mix.

Kevin Kon fell in love with music his whole life playing instruments. His father’s stories as a DJ in NY grew on him and led him to the culture at the age of 16. Growing on local Orlando radio, Kevin was influenced my Dj mixshows and how radio brought the community together with music.

Fast forward to now, Kevin Kon has been in radio for 6 years in Orlando/Tampa. His mixshows have been heard as far as NYC/FL/Cali.

You can catch Kevin Kon DJing at the HOTTEST venues right here in Downtown Orlando.

“Thankful for everyday & opportunity. Every set back is a solid tumble forward, and I’m excited to see what the future has for me next."

Born in Bucaramanga, Colombia and adopted at 2 months old, Mz.Marina grew up to call New Jersey home. Inspired by the sounds and sights of New Jersey and its neigboring New York, she grew to not only have a love for the music of the city but longed to be apart of it.

In 2007 Marina enrolled into Full Sail University and recveived a Bachelor's Degree in Music Business. One week before graduation in 2009 she landed a spot on WPYO Power 95.3 after winning a contest with the Obie & Lil Shawn Morning Show.

She's made her mark in Central Florida DJing on the radio, in clubs, at festivals, Disney properties and television. She's also involved with various annual charity events including the Walk to End Lupus. You can find her on air, producing her own music, DJing events around Orlando or just hanging out eating avocados.

Multi-award winning DJ Rincon is a phenomenon who’s wowed crowds all over Florida and beyond. Getting his start in music at a young age, Rincon graduated college with honors as a Digital Audio program technician — his meticulous skills and razor-sharp DJ knowledge propelled him to the very top of the DJ scene, practically spinning at every prestigious venue in central Florida. His style is true to the roots of DJing, with a fresh flair that gets elite musicians, athletes, and even other DJs out to see him.

Born in the Philippines and raised in Hawaii, DJ CHINO is a Florida based DJ and Producer. He built his brand in the music scene, performing at nightclubs and shows with Steve Aoki, Duke Dumont, Chainsmokers and other major artists. He is known as the nations most entertaining radio DJ with multistation mix shows in the U.S., Bermuda and the Philippines.

1446705445 As a chart-topper since 1988, DJ Magic Mike is far from a new comer, but one who has always managed to remain a bit more underground. The Orlando, Florida native is even noted as “The Best Platinum Artist You Never Heard Of” in Vibe magazine. Beginning in 1989, the initial goal of the DJ and his comrades was to simply sell twenty to thirty thousand copies in hopes of seeing their names on the Billboard charts. So the crew released DJ MAGIC MIKE AND THE ROYAL POSSE. "Although we knew we were hot, we never really took time out to count the rising sales. However, one day one of our employees brought it to our attention after counting the numbers that the album had sold over 500,000 copies. Completely shocked us. I was having fun anyway, and it didn't really hit me until the RIAA (Recording Industry Association of America) came down and present us with gold plaques at an Orlando concert, that's when everything became real,” explains Mike. Selling over a million copies, the album skyrocketed to Platinum status.

A year later, Mike made history with the release of BASS IS THE NAME OF THE GAME. The LP marked the first time a completely instrumental LP reached gold status. Soon after, in collaboration with the group Vicious Bass, DJ Magic Mike spawned yet another gold hit with the single "It's Automatic." The following albums, AIN'T NO DOUBT ABOUT IT and BASS: THE FINAL FRONTIER both received gold plaques as well. By consistently presenting top-notch efforts to his fans, the famed Boy Wonder could do no wrong. DJ Magic Mike monopolized the airwaves with club anthems such as "Drop", "Magic Mike Cutz The Record" and "Feel the Bass." In all, Mike has sold in excess of 5 million records worldwide with 1Platinum and 6 gold LP’s to his credit.

As the years progressed, the scratch master became a visual legend, as one of the trio DJ's for Coca-Cola, an impressive coup in television commercials. Mike was so captivating that others soon came knocking. Pioneer Electronics offered Mike a lucrative deal including national advertising in every mainstream magazine. That deal led to a current endorsement deal with Shure Electronics. Shure signed Mike because they said he is the only DJ they knew of that can spin music in every genre. That is unheard of with most DJ’s because most of them fall within certain music types. As the untouchable DJ in Florida, Mike has played to crowds ranging from 2000-20,000, including his infamous holiday weekend shows at House Of Blues (Downtown Disney) where he has sold the venue out consistently for the past 12 years. His credibility within the music industry has led to more strategic alliances with such music notables as Sir Mix A Lot, Poison Clan, Shortkut from the Skratch Piklz, MC Shy D, 12 Gauge and countless others. DJ Magic Mike is also accredited as being the first artist of bass music achieving gold and platinum status as certified by the RIAA.

Clearly Mike is a fifteen-album veteran and one-man enterprise. "I changed the perception of what it meant to be a DJ. For many years if a person started out as a DJ and later explored other territories such as artistry, it wasn't accepted," says Mike. Determined, he overcame those barriers, and today is internationally respected in a variety of music circles. “I feel I single handedly changed the role of the DJ not only through the southeast but the rest of the world. “You have heavyweights such as DJ Qbert, DJ Craze & Shortkut saying that I am the person that started them to spinning and who they got ideas from. That’s a big thing to me.”

A few years ago, Mike released his first project in over 12 years titled “Beyond The Magic” and it got rave reviews from fellow artist, DJ’s and fans worldwide. The first single is titled “We On” and it went to # 2 on Beatport’s break beat singles and also cracked the top 100 on iTunes electronic singles. Beyond The Magic topped the Beatport Electronica chart at #1, cracked the top 50 on iTunes and Amazon. Mike said “Beyond The Magic is a journey into my world, my life and my atmosphere. It gives you a glimpse into my inner state and where my mind has grown since the last release 12 years ago. I figured it was time to bring you into my inner sanctum so you can see where my head is at, mentally and physically. Hence BEYOND THE MAGIC.” Mike also signed a radio deal with Red Bull to feature a show once a month on their new station. The show played around the world once a month on the 3rd Friday of every month to upwards of 100k people. You can also catch Mike on the road touring in a city near you…

Enable our Custom Skill for all of your Alexa devices!

Everything you love about power953.com and more! Tap on any of the buttons below to download our app.

Enable our Skill today to listen live at home on your Alexa Devices!

You may be offline. Please check your connection and try again using the Retry button.